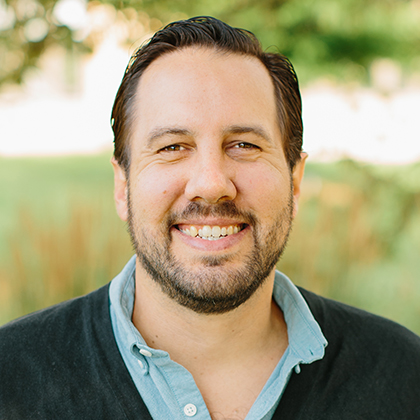 David Cramer, PhD, has a passion for understanding the difference the Christian faith makes for how Christians live in contemporary society. His scholarship focuses on the tradition of Christian social ethics from the early 20th-century social gospel movement to its 21st-century expression in Anabaptist theological ethics. In addition to teaching Christian Scriptures at Baylor University as a presidential scholar, he has been an adjunct instructor in theology, ethics, philosophy and Scripture at Bethel College in Mishawaka, Indiana.

He brings to his role as Managing Editor of the Institute of Mennonite Studies experience working for Baker Academic and Brazos Press in Grand Rapids, Michigan. He is currently the teaching pastor at Keller Park Church, an urban congregation in South Bend, Indiana. His writing has appeared in scholarly and popular outlets, including Christian Century and Sojourners, and he is currently working on a book on Christian nonviolence.

“A Field Guide to Christian Nonviolence: There are different ways to understand the gospel’s call to peace—and that’s a good thing,” Sojourners Magazine, January 2016, 31–35.

“Yearning to Breathe Free: Churches on the U.S.-Mexico border are making a statement about immigration—by working together to meet humanitarian need,” Sojourners Magazine, May 2015, 35–38.

“By What Criteria Does a ‘Grand, Noble Experiment’ Fail? What the Case of John Howard Yoder Reveals about the Mennonite Church,” Mennonite Quarterly Review 89 (2015): 171–93, co-author.

“Realistic Transformation: The Impact of the Niebuhr Brothers on the Social Ethics of John Howard Yoder,” Mennonite Quarterly Review 88 (2014): 479–515.

The Activist Impulse: Essays on the Intersection of Evangelicalism and Anabaptism (Pickwick, 2012), co-editor.

“Recovering the Christian Practice of Dying: A Response to Stanley Hauerwas’ ‘Finite Care in a World of Infinite Need’,” Christian Scholar’s Review 41 (2012): 357–66.