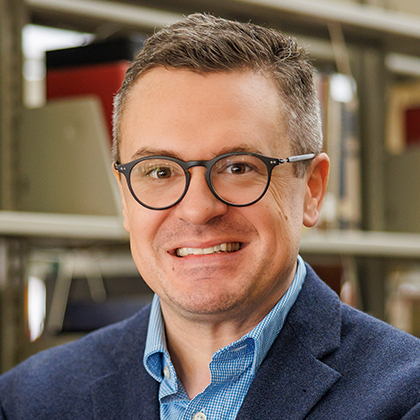 Drew Strait, PhD, brings a contagious enthusiasm for the world of the earliest Christians to his work as a theological animator of Scripture, seeking to connect the dots between early Christians’ radical discipleship and the ways contemporary assemblies of Jesus followers can embody God’s future just world now. He is passionate about becoming the gospel in community as practitioners and agents of hope and new creation among those exploited by the fallen powers of this world. Drew’s passion for the church’s potential to lift up the brokenhearted has led him to various ministry venues, including mission work with Haitian refugees in the Dominican Republic, an interim pastor role at Living Water Community Church in Chicago (Mennonite Church USA) and, most recently, serving as an elder at Peace Fellowship in Washington, D.C. He comes to AMBS after teaching New Testament for five years at St. Mary’s Ecumenical Institute in Baltimore, Maryland.

How does the Bible shape your vocation as a professor?

I discovered the Anabaptist tradition in my early 20s after the United States’ preemptive invasion of Iraq. At the time, I was bewildered by many Christians who I witnessed cheering on the shock-and-awe campaign, which included the mutilation of innocent civilians. This experience generated a desire to better understand the relationship between the teachings of Jesus and the church’s posture toward imperial concentrations of power, including nationalism and the military apparatus.

For me, then, to teach the Bible with an innovative Anabaptist vision is to foster reading habits that animate the earliest Christians’ life together under the kingdom. This means learning to (re)read Scripture not in some abstract, disembodied way but, rather, to find creative ways to internalize the gospel in alter-cultural communities that bear witness to a Messianic ethic of loving God and neighbor.

What can students expect in your classroom?

My passion is to bring the world of early Judaism/Greco-Roman antiquity alive for students of the New Testament as a means to do theological animation for the church. I try to achieve this through engaging lectures, classroom discussion and small-group exegesis exercises.

I also believe that Scripture is best interpreted in community. This means getting to know one another’s stories and bringing our stories to bear on Scripture together — attending to how our own lenses can bend and distort early Christian literature.

Finally, I try to instill in my students that our optics on Scripture are profoundly shaped by our social location. As my students read primary and especially secondary sources on Christian origins, we aim not to read in the echo chamber of the ivory tower or get lost in the whiteness and maleness that is the history of interpretation. Instead, my students can expect to encounter the voices of marginalized interpreters—both written and oral—as we build a vibrant interpretive community together.

What are some of the most pressing challenges you see facing current and future church leaders and Christian scholars?

One challenge that stands out to me is the need to reclaim the church—rather than the state—as the primary context for Christian mission and witness. The controlling narrative in many church circles is not Jesus and the kingdom. Rather, nationalism and partisan allegiances fund Christian identity. My aim is to flip this script by empowering disciples with the theological imagination to prioritize allegiance to the kingdom of God, with all the countercultural habits that this worldview entails.

In North America, and especially in the United States, the allure of state and military power coupled with fear of the other and a legacy of white supremacy has produced Christian communities intoxicated with imperial power rather than the cruciform power of God. We need pastors and scholars with the skills to animate the Apostolic tradition for the moment we find ourselves in. This means immersion in primary and secondary sources as well as in prayer, resistance, and singing communities that fully embody the bright luster of the weightier matters of the law: “justice and mercy and faith” (Matt 23:23). It is out of this posture of allegiance to God that the church’s mission thrives, including our prophetic witness to the state: to leverage our influence on the moral arc of the universe toward justice for all.

My goal for students

My hope for students is that they become theological animators of Scripture and practitioners of God’s reconciling mission.

I want my students to leave AMBS with a knowledge of early Christianity that sparks passion to participate in God’s mission to bring about a new just world.

I want my students to be the kind of people who show up in embodied ways to interrupt patterns of sin and injustice in this world—to imitate the radical discipleship of the earliest Christians in their confession that “Jesus is Lord.”

Hidden Criticism of the Angry Tyrant in Early Judaism and the Acts of the Apostles. Minneapolis: Lexington/Fortress Press Academic, 2019.

(with David C. Cramer) “A Total Way of Life: Our Journeys from Evangelicalism to Anabaptism.” The Mennonite, August 2020.

“Peace, Reconciliation,” in The Dictionary of Paul and His Letters, 2nd Edition (forthcoming)